Different types of thermal cameras and their history

The first thing we’ll do is look at the history of different types of thermal cameras. In 1800, Sir William Herschel discovered that infrared radiation exists beyond the red light spectrum. Thermal measurement was done mainly using these “infrared rays” (infra is the Latin prefix for “below”).

In IR radiation, there are four basic laws: Kirchhoff’s law of thermal radiation, Stefan-Boltzmann’s law, Planck’s law, and Wien’s displacement law. Until World War I, detectors were primarily developed using thermometers and bolometers. Using the Seebeck effect, Leopoldo Nobili developed the first thermocouple in 1829, creating an improved thermometer, the crude thermopile. In 1832, he told Macedonio Melloni about it. They jointly developed an instrument that was considerably improved. The following year Melloni worked alone to create a device able to detect humans 10 meters away (a multielement thermopile).

In 1880, Samuel Pierpont Langley invented the bolometer, the next significant advancement in thermal imaging technology. This instrument continued to be improved by Langley and his assistant Charles Greeley Abbot. As early as 1901, it was able to detect cow radiation from 400 meters away and was sensitive to temperature differences of 0.001 degrees Celsius. Thermal imaging cameras were used for high voltage power line inspections for the first time in 1965.

In 1913, a type of infrared thermographic camera using a mirror and thermopile to detect the presence of icebergs and steamships was patented as one of the first advanced applications of IR technology in civil engineering. However, this was soon surpassed by the first accurate IR iceberg device without thermopiles, patented in 1914 by Robert D. Parker. Barker then proposed the idea of using IR to detect forest fires in 1934. After 1935, when hot steel strips were analyzed for heating uniformity, the technique was genuinely industrialized.

Hungarian physicist Kálmán Tihanyi invented an anti-aircraft defense electronic television camera with infrared-sensitive (night vision) in 1929. Infrared line scanning was the first thermographic camera developed by the United States. US military and Texas Instruments worked together to create this in 1947, which took one hour to produce a single image. There were numerous approaches to improving the image scanning technology, and the AGA company was able to commercialize a cooled photoconductor in order to increase speed and accuracy.

In the mid-1950s, the British Yellow Duckling was the first infrared linescan system. The system used a rotating mirror and detector that was scannable along the Y-axis when the carrier aircraft moved. The IR linescan was applied to land-based surveillance and became the foundation for military IR linescan, despite its failure as a submarine tracking method.

Mercury cadmium telluride was discovered to be a photoconductor that required much less cooling in the United Kingdom. Honeywell developed a similar array of detectors in the United States; however, those scanned mechanically and could cool at a lower temperature. An electronic scanning system could eliminate several disadvantages of this method. Several breakthroughs in the 1970s led Michael Francis Tompsett at English Electric Valve Company in the UK to patent a camera that could scan pyro-electronically. In addition, Tompsett developed an idea for a solid-state thermal imaging array, which later led to the development of modern single-crystal types of thermal imaging devices.

In the development of security systems, one of the most essential components was intelligently evaluating a signal and warning of a threat’s presence. The US Strategic Defense Initiative encouraged the development of “smart sensors.”. These sensors can sense, extract, process, and comprehend signals. There are two main types of smart sensors. The use of an integrated microcircuit allows for preprocessing of data using intelligent sensing techniques, similar to what is known as a “vision chip” when used in the visible range. One of the other technologies has a more specific purpose and fulfills its preprocessing goal through its structure and design.

In the 1990s, infrared began to be used more and more for civilian purposes. With dramatic cost reductions for uncooled arrays and significant technological advancements, we were able to create a dual-use market for civil and military applications. A few examples are environmental control, building/art analysis, functional medical diagnosis, and collision avoidance in cars.

Thermographic cameras can be categorized into two types based on their infrared image detectors: cooled infrared detectors and uncooled detectors.

Detectors that are cryogenically cooled typically contain vacuum-sealed cases or Dewars. Such cooling is needed for semiconductor materials to function correctly. Depending on the detector technology, operating temperatures can range from 4 K (*269 °C) to just below room temperature. There are various types and performance levels of cooled detectors, which operate in the range of 60 to 100 Kelvin (K) (-213 to -173°C).

In order to function properly, these sensors (which detect and convert light similarly to standard digital cameras but are constructed from different materials) need cooling to avoid being blinded by their own radiation. Infrared cooled cameras have the disadvantage of being expensive to produce and operate. It takes a long time and a lot of energy to cool these types of thermal cameras.

Usually, thermal cameras must be cooled down for several minutes before they can work. Peltier coolers are the most common cooling system; despite being inefficient and limited in cooling capacity, they are relatively compact and straightforward. Stirling engine cryocoolers are needed to improve image quality or image objects at low temperatures. Infrared cameras that are cooled provide better images than uncooled ones, especially for objects near or below room temperature, even if the cooling apparatus is relatively bulky and expensive. Furthermore, the higher sensitivity of cooled cameras can also be used to use higher-quality lenses, which makes high-performance lenses with long focal lengths smaller and more affordable.

Using bottled gases at high pressure is an alternative to Stirling engine coolers, with nitrogen being one of the most popular options. A micro-sized orifice is used to expand the pressurized gas, which passes over a heat exchanger to produce regenerative cooling using the Joule-Thomson effect. The logistics of supplying pressurized gas to such systems pose a concern for their use in the field.

Since superconducting tunneling junctions have a very narrow gap, they can theoretically be used as infrared sensors. Because of their high sensitivity, their use has not been widely adopted since they need to be shielded from background radiation.

In some cases, superconducting detectors can even register individual photons. A great example is the ESA’s Superconducting camera (SCAM). These cameras are largely unused outside of scientific research despite their great potential.

Sensors in uncooled thermal imaging cameras work at ambient temperatures or close to ambient temperatures if they are stabilized with small temperature control elements. Uncooled detectors today have sensors that work by changing resistance, voltage, or current as a result of exposure to infrared radiation. The sensor’s operating temperature is compared to the measured changes.

As these sensors are not cooled to low temperatures, there is no need for bulky, expensive, and energy-consuming cryogenic coolers. However, they can be stabilized to a temperature that reduces image noise. This allows these types of infrared thermographic cameras to be smaller and more affordable. However, their image quality and resolution are generally lower than those of cooled detectors. Due to current technology limitations, differences in fabrication processes account for this. Additionally, uncooled thermal cameras must deal with their own heat signature.

These detectors rely mainly on ferroelectric and pyroelectric materials or microbolometers. As a result of the material’s heat-dependent properties, pixels are formed that are thermally insulated from their surroundings, and they are able to be read electronically.

NETD can be as low as 20 mK with silicon microbolometers. Their sensing elements are suspended on a silicon nitride bridge above a silicon-based scanning electronics layer. A measurement of the element’s resistance is performed once per frame.

How does a thermal camera work?

Drone 3D mapping and everything we need to know about it 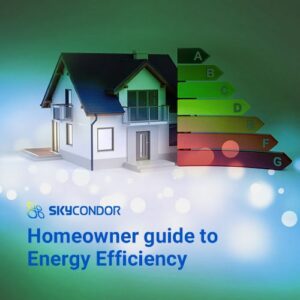 How does a thermal camera work?

Drone 3D mapping and everything we need to know about it